Your work in algebra to this point has involved the four basic operations: addition, subtraction, multiplication, and division. In this chapter we will introduce the new operation of extracting roots, which is necessary to solve equations other than those of first degree. Since extracting roots is related to raising to powers, we will first review and expand the laws of exponents.

In chapter 7 we introduced and used the laws of exponents. We wish to review them here.

Here are some examples to refresh your memory. 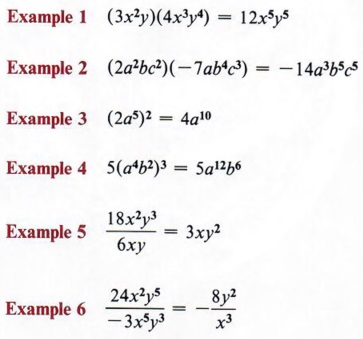 Now we will expand the concept of exponents to include all integers and not just the positive integers. If we pay special attention to law 3, we can see the reason for the definitions that follow.

and make no requirements as to the relative size of a and b. This will lead to two special cases, which in turn will require special definitions.

If, then, this law is to apply in this special case, we must make the following definition. 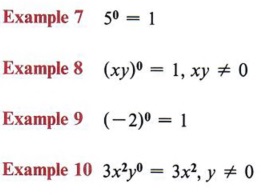 Now look at a problem such as

. These two seemingly different answers to the same problem lead to the following definition.

We can now write the third law of exponents simply as

The laws of exponents will all apply to these new definitions. When working with negative exponents, be especially careful to use the laws of signed numbers properly. 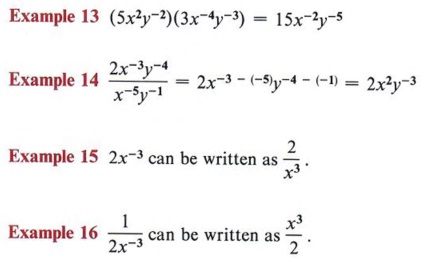 Exponents are used in many fields of science to write numbers in what is called scientific notation. If a number is either very large or very small, this method of expressing it keeps it from being cumbersome and can make computations easier.

A number is in scientific notation if it is expressed as the product of a power of ten and a number equal to or greater than one and less than ten.

Notice that the definition is very explicit. The product must be of a number equal to or greater than one and less than ten, and a power of ten.

but this is not scientific notation because .93 is not equal to or greater than one.

Solution Immediately we see that part of the answer must be 3.45 (equal to or greater than one and less than ten always gives one digit to the left of the decimal point).

If we now look at 3.45 we must ask, "What power of ten will return the decimal point to its original position?" Counting, we get eight places to the left, so

Scientific notation is useful in other ways than making numbers less cumbersome. Computations involving very large or very small numbers can be simplified because of the laws of exponents. 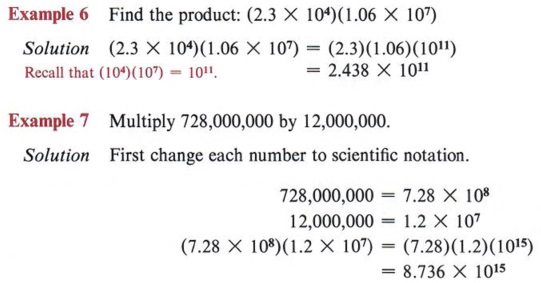 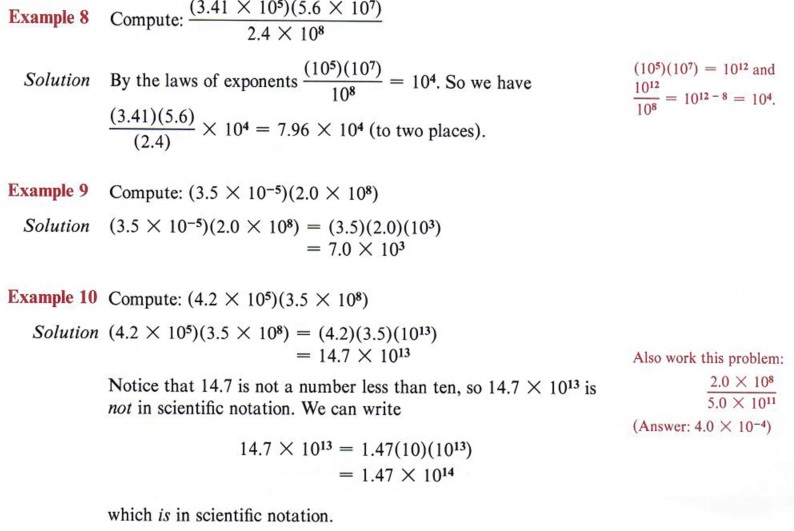 In chapter 7 the symbol

was defined to be the principal square root symbol. By way of review we will re-state the definitions concerning square root.

From this definition we have seen that every positive number has two square roots, one positive and one negative.

Recall these definitions from chapter 7.

is called a radical sign and indicates the principal square root of a number.

When these definitions were introduced and used in chapter 7, we were only interested in perfect square numbers such as 4, 9, 25, 81, 100, and so on. However, it is true that all positive numbers have two square roots. The square roots of numbers that are not perfect squares can be indicated by using the radical sign.

The quantity under the radical sign is called the radicand.

does not exist, or has no solution. In a more advanced study of algebra a set of numbers called the complex numbers will be introduced and, in that set, square roots of negatives will be defined. But for our present work, if the radicand is negative, state "no real solution."

Square roots of positive numbers that are not perfect squares can be found correct to any number of decimal places by several methods. The "mechanical" or "rote" methods are based on algebraic concepts not yet developed in this book. Of course, the easiest method is to use a hand-held calculator and the next easiest method is to use a table such as the one printed on the inside back cover of this book.

Our purposes here do not require these estimations but you should have some concept as to the value of these numbers.

As an exercise, you will be asked to guess or estimate the value of some square roots and then check your guesses.

Now we wish to establish some facts about radicals. The following discussion leads to some important conclusions, so follow it carefully.

We now state these observations in general form.

A square root radical is in simplest form if no factor of the radicand is a perfect square.

We can now use this definition and the preceding rule to simplify square root radicals. 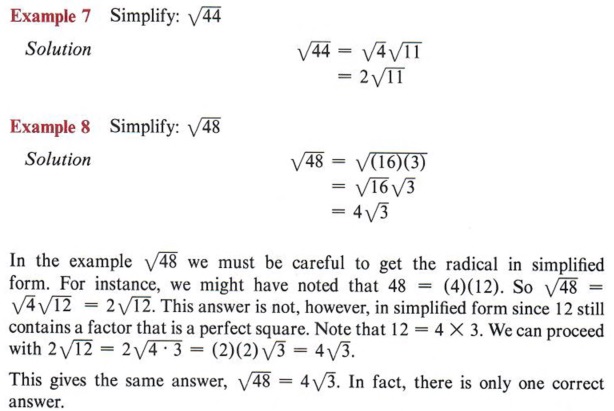 From these examples it is evident that memorizing a list of perfect squares will speed your work. If a radical is to be in simplified form, no perfect square may be left under the radical.

An alternative method of finding all squares under the radical is especially useful for larger numbers.

and from the definition of square roots you can see that every pair of like factors under the radical give a perfect square (in other words,

In summary, simplify a square root radical by expressing the radicand as the product of two numbers, one of which is the largest perfect square factor. Or, if no such product comes to mind, factor the radicand completely and look for pairs of numbers that give perfect squares.

The same methods applied to the preceding exercises dealing with number rad-icands can be applied if the radicand contains letters or both numbers and letters. You must know, of course, that the letters cannot represent negative numbers.

Important! Unless otherwise stated, letters under radicands in this text will represent nonnegative real numbers. 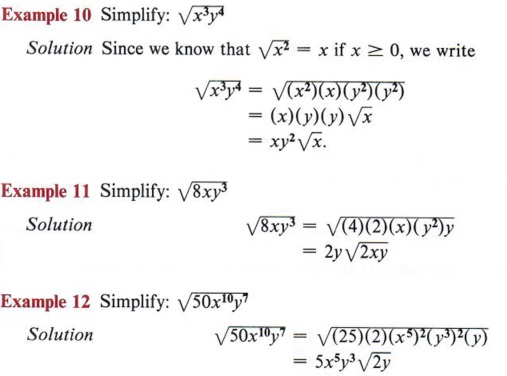 In the preceding sections we have dealt with individual radicals. We now wish to discuss the basic operations on radicals.

As we have stated several times, only like quantities may be combined.

We cannot be sure that radicals are or are not like radicals unless they are in simplest form.

We have a rule that states

. Using this rule and knowledge of multiplication, we can now multiply radical expressions. 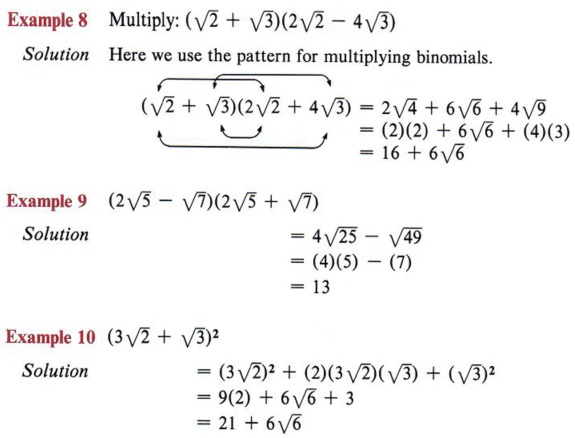 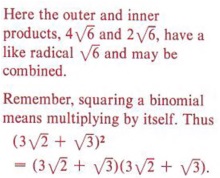 We now turn our attention to algebraic expressions that contain radicals. Our goal is to develop methods of simplifying such expressions.

Any algebraic expression which contains a radical is called a "radical expression."

Referring to the definition, we see that the first condition is met since

are each in simplest form. However, the second condition is not met since we have a radical in the denominator.
To simplify such an expression we first appeal to the fundamental principal of fractions, which is stated as

. We can multiply both numerator and denominator by the same nonzero number and still have a fraction equal to the original.

This process is known as rationalizing the denominator. 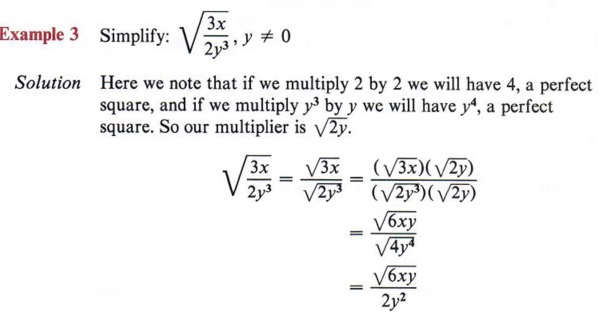 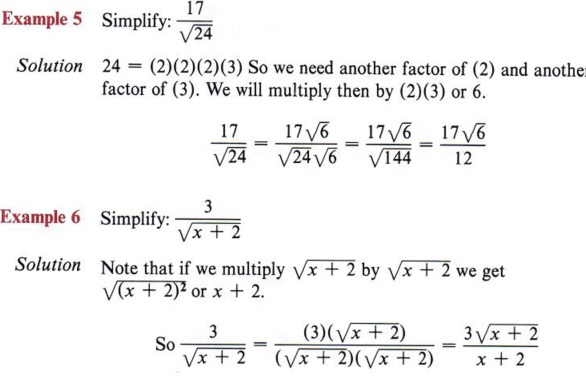 A very different problem is presented if the denominator is not a single radical.

Solution Since we have a binomial in the denominator, we cannot multiply it by itself, for this will give a middle term that still contains a radical. We remember that the only time we can multiply a binomial by another binomial and not get a middle term is if we have the product of the sum and difference of the same two numbers. So the multiplier must be 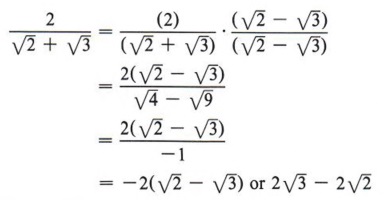 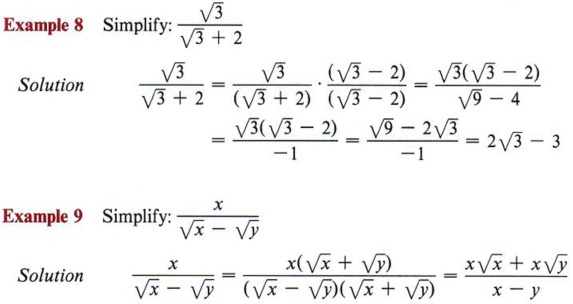