Enter an expression containing the sum or difference of fractions and click the Add fractions button.
Help

As noted in Section 1.2, we often indicate the quotient of two numbers a ÷ b, b ≠ 0, by the fraction

In Section 1.2 we defined a quotient

We can also view a quotient in terms of a product. For example,

We can use this property to help us graph arithmetic fractions on a number line. For example, to graph the fraction

, which is equivalent to

Fractions can involve algebraic expressions. In such cases, since division by 0 is undefined, we must restrict variables so that a divisor is never 0. In our work, we will assume that no denominator is 0 unless otherwise specified. For example,

Fractions that have different signs may have the same value. For example,

Each fraction above names the number 2.

Each fraction above names the number -2.

The above examples suggest the following rule.

Any two of the three signs of a fraction may be changed without changing the value of the fraction. 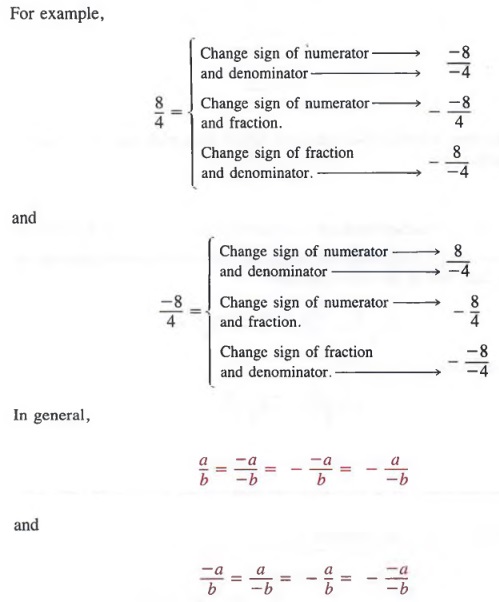 In this book, the two forms

, which have positive signs on the denominator and on the fraction itself, will be considered standard forms for fractions. Sometimes answers are left in the form

instead of the standard form

If the numerator contains more than one term, there are alternative standard forms for a fraction.

and any of the three forms on the right-hand side of the equals sign may be taken as standard form.

, we must be careful how we change the signs in the numerator. The use of parentheses helps us avoid errors. Note that in the above example

In particular note that

In algebra, as in arithmetic, to reduce a fraction to lowest terms, we use the following fundamental principle.

If both the numerator and the denominator of a given fraction are divided by the same nonzero number, the resulting fraction is equivalent to the given fraction.

This fundamental principle is particularly useful in the following form:

When we reduce fractions, it is easiest to first write the numerator and denominator in factored form and then divide each by their common factors.

It is critical that when we reduce a fraction in which the numerator and/or the denominator contains more than one term, we must factor wherever possible before applying the fundamental theorem.

Solution First, we factor the numerators and denominators and then divide out common factors.

AN ALTERNATE METHOD OF REDUCING FRACTIONS

In cases such as this, where no quotient is indicated above or below the factors "divided out," the quotient 1 is understood. 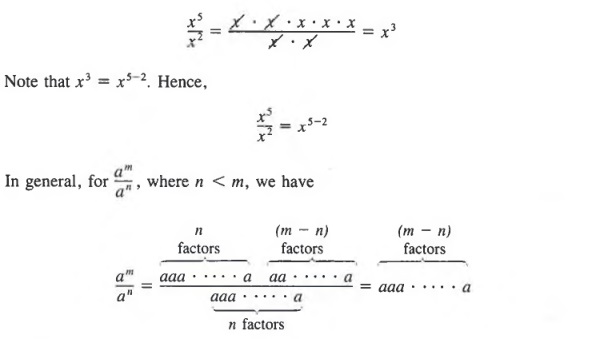 which, in exponential form, is written as am-n. Thus,

If the greater exponent is in the denominator, that is, if n is greater than m, then

Thus, when we divide powers with the same base, either we can factor each power and divide out common factors or we can use Properties (1) and (2) above.

by
a. Using the fundamental principle of fractions.
b. Using Properties (1) and (2).

Common Errors: Many errors are made in working with fractions. Careful attention to the following kinds of errors may help you to avoid them. Note that

From the fundamental principle of fractions,

From the fundamental principle,

As another example of a common error, note that:

we cannot “divide out” the 2’s until we write 2 as a factor of the entire numerator. Thus,

In Section 5.2 we simplified a quotient by reducing the fraction. In this section, we will study two alternative methods of rewriting quotients in equivalent forms.

We use the first method when the divisor is a monomial. As noted in Section 5.1,

and by the distributive property,

We use the next method when the divisor is a polynomial. In this case, we use a process similar to arithmetic long division, as the following examples illustrate. 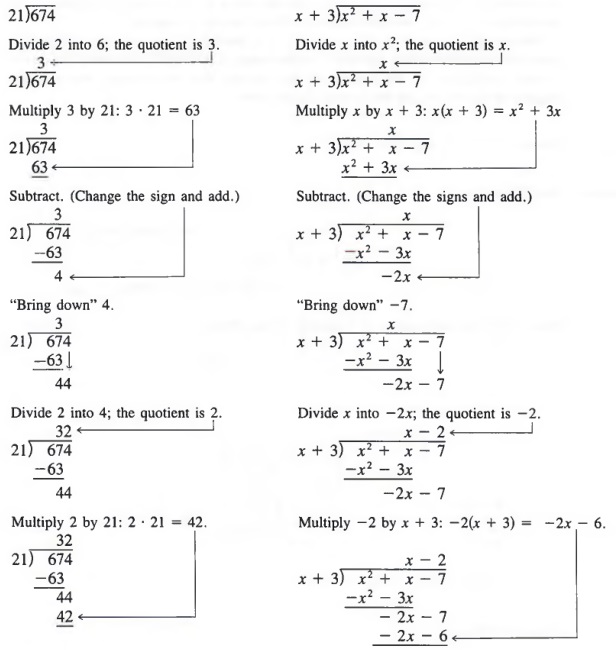 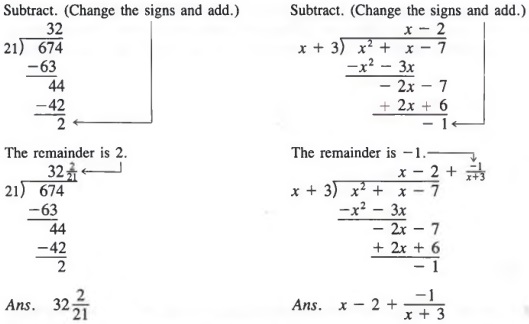 Now, using the techniques of Example 2, we 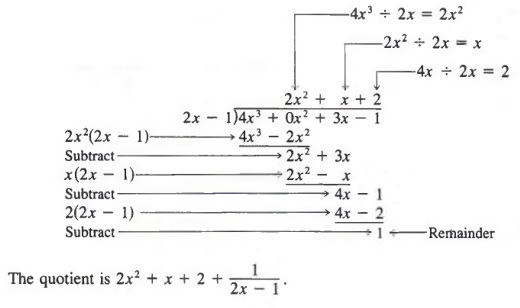 If both the numerator and denominator of a given fraction are multiplied by the same nonzero number, the resulting fraction is equivalent to the given fraction.

When we apply this principle, we are actually multiplying a quantity by 1 because

to a fraction with a denominator bc:

Example 1 Express 3/4 as a fraction with a denominator of 8.

Example 2 Express the first fraction as a fraction with the indicated denominator.

First, we obtain the building factor by dividing x3y2 by x2y to get

Then, we can multiply the numerator and denominator of the first fraction by this building factor to obtain

If negative signs are attached to any part of the fraction, it is usually convenient to write the fraction in standard form before building it.

and then proceed as in Example 2.

It is helpful, when obtaining the building factor, to first write denominators in factored form.

Next, we obtain the building factor

Now, we multiply the numerator and denominator of

In this section, we will introduce another symbol for a fraction of the form

and then we will use this symbol to write certain numbers in simpler form.

Recall that we have defined a power an (where n is a natural number) as follows:

We will now give meaning to powers in which the exponent is 0 or a negative integer. First, let us consider the quotient a4/a4. Using the property of quotients of powers, we have

for any number a except 0.

Now consider the quotient a4/a7. Using the two quotient laws for powers, we have

Thus, for any a not equal to 0, we can view a-3 as equivalent to

. In general, we define

for any number a except zero.

Very large numbers such as

and very small numbers such as

First, let us consider some factored forms of 38,400 in which one of the factors is a power of 10.

Although any one of such factored forms may be more useful than the original form of the number, a special name is given to the last form. A number expressed as the product of a number between 1 and 10 (including 1) and a power of 10 is said to be in scientific form or scientific notation. For example,

are in scientific form.

To write a number in scientific form:

If a number is written in scientific form and we want to rewrite it in standard form, we simply reverse the above procedure.

The exponent only applies to the x, not the 3. Thus,