The integrate command will calculate definite and indefinite integrals.

The advanced integrate command allows you to calculate multiple integrals. Simply enter each variable you wish to integrate with respect to (with limits as described above if required) on a separate line in the variables text area.

Here are some examples illustrating the types of expressions you can use the integrate command on and the results which QuickMath will return.

The Integral as an Area

The definite integral, introduced in this section, and the derivative are probably the two fundamental concepts in calculus. We shall introduce the definite integral in terms of the geometrical notion of "area under a curve." The familiar geometrical concept of area provides an intuitive way to approach the integral. However, the definite integral has many other applications. In the next chapter, we shall see applications to business, science, and probability and statistics. The tie-in between the antiderivative and the integral will become more apparent in the next section.
As a preliminary word on notation, closed intervals of the form a <= x <= b are frequently referred to by means of the standard notation [a, b]. Then, in defining the integral as the "area under a curve," the curve we consider is the graph of a function and the area is the one "between" the graph on a closed interval [a, b] and the horizontal axis. Strictly speaking, it is the area bounded by the graph, the horizontal axis. and the lines x = a and x = b. To make sure there is such an area, we want the function to satisfy the following conditions.

We are about to introduce what may seem to be rather curious notation. (The objects we are now defining will ultimately have more application than area, and we need a sufficiently general notation.)

Let/be a function satisfying Conditions 1 and 2. For any x in [a, b ], the area under the graph off from a to x (see Figure 2) is denoted by

Warning! Although the notations for both the integral and the antiderivative include the integration symbol, they should not be confused; the underlying concepts the represent are quite distinct. We shall see later an amazing relationship between these concepts.

Note that the integral depends on x (as well as a and f, of course); thus, to keep the bookkeeping straight, the function f will be given in terms of some variable other than x such as t , for example, in the above definition and it will be convenient to think of the horizontal axis as, in this case, a t-axis (see Figure 2). In terms of this new notation:

as an area and compute its value. 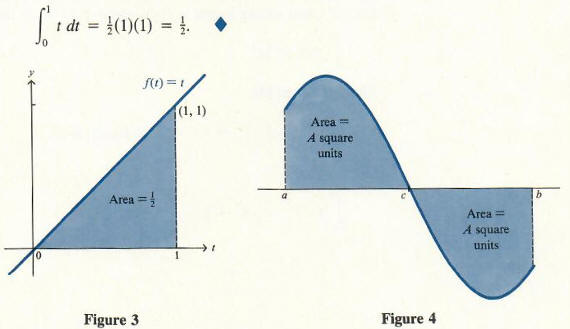 For functions satisfying Conditions 1 and 2, the integral may be interpreted as an area. For an arbitrary continuous or piecewise continuous function (arbitrary in the sense that the function may be positive for some values and negative or zero for others) a useful interpretation of the integral is as a "signed" area in the following sense: whenever the graph of f is above the x-axis, the integral of f is the area under the graph of f, interpreted in the usual geometrical way as a positive number, but when the graph of f is below the x-axis, the negative of the area is used when integrating f. Another way to think of this is the following:

Notice that the area under the curve (that is, number of square units in the region) is 2A square units and hence the area is given by